The world population as of 2020 stood at 7.8 Billion. At the same time, there are 3.2 billion smartphone users in the world. We can safely assume that by mid-2021, at least half of the world would be smartphone users.

Smartphones have become the modern-day Swiss army knife. For anything and everything that is an app. Right from the essential watch to a high-end camera, there are several tools that smartphones and mobile apps have replaced. Not to miss mentioning that with the arrival of digital wallets, leather wallets or pouches are also at the risk of extinction.

There is no denying the fact that it is apps that make smartphones, well “smart” enough. There are billions on the app store. From messaging to productivity, and lifestyle, there are endless categories of mobile apps.

This blog is an exploration of the facts and figures that shaped the mobile app space in 2020 and will continue to shape them in 2021.

It is not surprising that an average smartphone user has more than 40 apps installed on their phone. However, only 18 of the apps are actively used or, phrased differently, maximum user’s time is being spent on these apps.

As of June 2020, 94.6% of apps downloaded on the Google Play Store were free apps. This makes it certain of the commonly known fact that smartphone users are hesitant to pay for mobile apps. 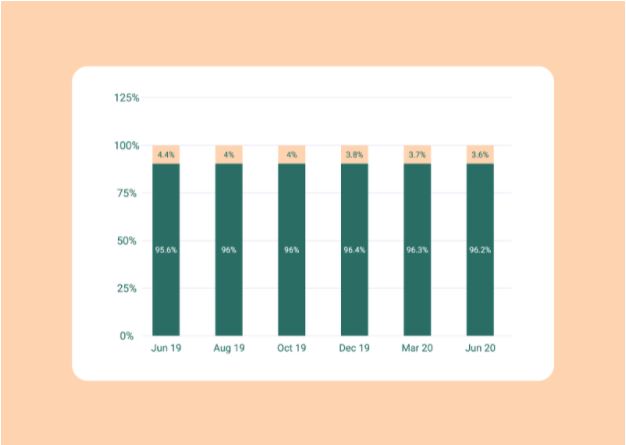 Also, the top ten downloaded mobile apps on Google Play Store are those that can be downloaded for free.

Owing to its larger user base, and also because it has more apps available for free download, Google Play Store has more market share than Apple iTunes. Apple iTunes and Google Play Store are the world’s leading app stores. There are other emerging players like Windows Store and Amazon Appstore.

Microsoft Store and Amazon Appstore have 669k and 459k apps respectively. There are also other app stores of the world like Tencent’s app store which currently has about 100,00 apps (as of July 2020)

Despite having a low number of mobile apps, in terms of revenue earned from monetizing apps, the Apple Play store is way ahead of the Google Play store.

By the end of 2020, Apple iTunes had earned a whopping 19 Billion USD while Google Play Store earned 10.3 Billion USD.

All app stores combined, the mobile app industry was projected to earn $581.9 Billion in revenue by the end of 2020. Gaming is the biggest category that contributes to mobile app revenue. Across iTunes and Google Play store, games top the chart as the most downloaded app category. Business, education, entertainment, and lifestyle follow shortly behind.

65.7% of users in the United States have at least one gaming app installed on their smartphones. Communication, social, web browsers, occupy the rest of the popular categories.

To get a true picture of app retention and churn, it is necessary to look at the metrics from a 30-day, 90-day, and annual perspective.

According to Apptentive, the app retention rate for the above-mentioned periods are found as below: If your mobile retention rates exceed these numbers, it is a cause for concern. Immediate steps must be taken to arrest churn and improve retention.

With every passing year, mobile apps and mobile user behavior change drastically. Users are no longer loyal to a single mobile app and are willing to move to other better alternatives. The millions of mobile apps flooding the app stores also offers tough competition.

The statistics outlined above indicate how the mobile app space has shaped in the past and where it is heading in the future.

As is clearly visible, Apple and Google are leading the mobile app space; their iTunes and Play store portals are frequented by most mobile users leaving other platforms with a small population of mobile users to serve.

Additionally, users are also willing to spend lavishly on the mobile apps that serve them well. The swelling revenues of mobile apps ascertain this fact. However, improving retention and arresting churn still remains a critical challenge for all mobile app developers.

That sums up how mobile apps were downloaded and used in 2021.